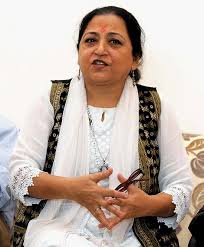 Madhu Purnima Kishwar was Professor at the Centre for the Study of Developing Societies and Director Indic Studies Project at CSDS till 2016. Since then she has been awarded Maulana Azad National Professorship of the Indian Council for Social Science Research. Her life work represents a rare combination of academic scholarship, research based social and legal activism, including public interest litigation and investigative journalism on issues concerning the most neglected strata of society as well as blasting negative stereotyping of Indian society.
Kishwar’s areas of work include but are not confined to:

Promotes a people-centric study of diverse cultures and faith traditions in the Indic universe.
‘Laws, Liberty and Livelihoods’, aimed at evolving a pro-poor agenda of economic reforms in India;
Strengthening the culture of “Gender Justice” through a culturally sensitive approach to strengthening women’s rights by remaining tuned to the context in which women of diverse communities, regions, castes, and class groups are situated.
Legal aid and PIL on behalf of vulnerable groups.

She is also the founder editor of Manushi – A Journal about Women and Society and Manushi Sangathan, an organization working for democratic reforms that promote greater social justice.

Kishwar has authored a number of books:

Religion at the Service of Nationalism and Other Essays, Oxford University Press, (1998),

Asifa of Kathua: A Sacrificial Victim of Mission Ghazwa-E-Hind, Bloomsbury 2020
Beyond Copycat Feminism: Women’s Issues from an Indic Perspective. Bloomsbury 2021

Books edited by Kishwar which also contain chapters written by Kishwar include:

The Dilemma and Other Stories by Vijaydan Detha, Manushi Publications, (1997),

In addition, Kishwar has published over 350 articles in various newspapers and academic journals in addition to over 30 chapters in various books.

Kishwar has received several awards for her journalistic writings and activism.

She has also made several documentary films:

Mera Bharat Pareshan (Governmental Controls on Agriculture and the Increasing Rural) Urban Divide being promoted through our Farm Policy.